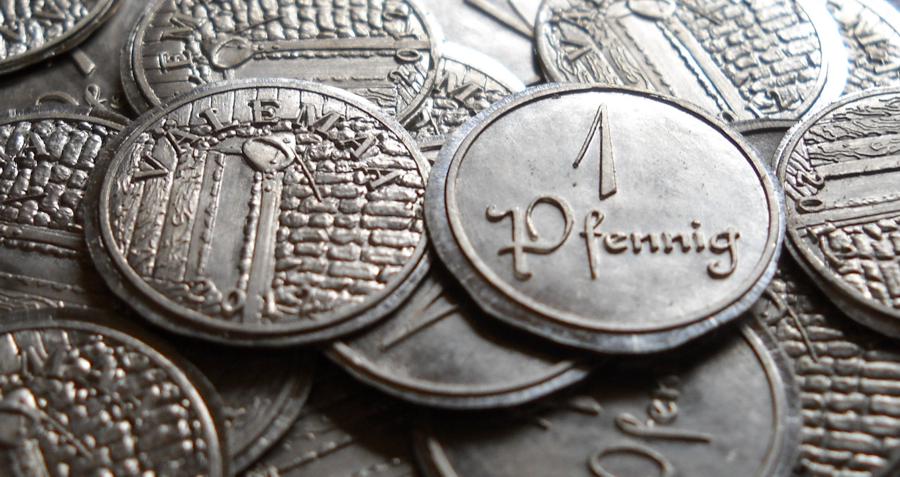 Below, the 500 mintage of the first Valemaa coin shows the two 'versions'.  The top coin shows the version that received a chemical bath to bring highlights to this original design that so aptly displays the creative talents of Edwin Johnston while the bottom image shows the version with no chemical treatment.  Both coins are .999 silver, approximately 14 millimeters and .5 gram.  The release date is April 1, 2012 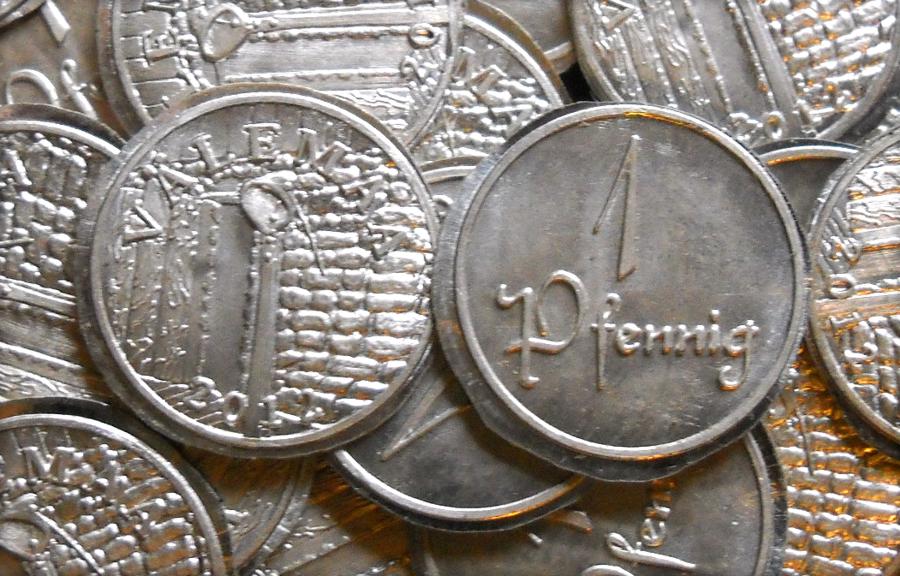 Välemaa is certainly not a showplace, at least according to an article on the island. It is a poor and destitute place.

“Little known Välemaa remain an off the beaten path destination for good reason. There simply is no reason to visit unless you are from there. Even then, chances are you prefer Välemaa to remain a distant memory. Their lot is a mere strand of sand any sensible person would never consider a place worthy of a home.

Only a shell of her former glory, Välemaa is now a destitute outpost in the Baltic threatened by global warming, storms and a lack of resources. In earlier days the self-sufficient inhabitants scratched out a living from fishing, and while never wealthy, enjoyed a substantial trade that produced a level of life that was not teetering on the edge of collapse. Today, with few customers for the daily catch and an aging infrastructure, the island, it appears, will never regain her glory days.

Välemaa can easily point to the time when her glory days dwindled. It was World War II when the Russian Naval forces took control of the island. While the other islands had been evacuated, the people of Välemaa refused to leave. It was during the war the robust trade ended and the spark in the souls of the inhabitants burned out. After the war, they soldiered on in their lives, but the modern world threatened.

The young frequently left Välemaa and found lives elsewhere. Few came back. The buildings began to show wear from the harsh climate. The customers seeking a fresh catch of Baltic fish became fewer. Slowly the island lost her luster.

Today the few who remain are much like those on death watch duty. Death is imminent but it comes at such a snail’s pace. You can see it in the eyes of the islanders. The glimmer is missing.”

I see an island past her prime searching for something to bring her back from the battle with time, but I see some beauty and ruggedness. I see some value. Sure Välemaa does not offer much and never did, but surely there is a shiny prize covered by the aging island.

Välemaa looks more like a tropical atoll of sorts. A sandbank a bit over six miles long curves in upon itself much like an atoll with the eastern flank broken in three spots to create one large stretch of land and three small pieces. In essence, Välemaa is one big sand dune. The width of the island is only around a thousand feet. Toward the eastern side, there is elevation, protecting the island from storms. Some think this elevation is the result of rubble washed ashore during high tide and winter storms to make a natural barrier from high waves. Maybe it is partially handmade by man over the centuries. The island has a few small ponds that have fresh water. We note the sandy makeup of the land helps rid the water of salt. The same sandy soils allow groundcover in the form of grasses and berries to grow wild.

The settlement is weathered and worn by the salt air, much in need of a good painting. Near the houses old fruit trees and gardens cover the area and fronts of homes are adorned with flower beds, mostly in need of weeding. The homes are tiny, just mere shacks, with makeshift repairs evident, sometimes in several spots. There is still no electricity or plumbing. Outhouses are still in use and water is carried from wells to the homes. There are no motorized vehicles. Even gardening is done with simple hand tools. You will not find television sets or computers in the homes. Some say cell phones work on the island and others say they do not. For example one says in 2007 there is cell service but another in 2009 says there is no cell service. Many homes have a battery operated radio and a couple have a marine band radio including two way communication.

The people appear as stepping out of time with fashion more common to a time 50 or 60 years previous. Even their clothing shows evidence from many washings, no longer brightly colored but more pastel. Most are older and many white haired, showing signs an easy life was not their lot. Even so, they appear proud, stately and resolved. They are quiet, reserved and show no remorse for their lot. For them, the scattered faded wood shacks are home with the same elements of comfort anyone finds in their place of birth. The islanders are not the sort to fight or make a scene but are the ones in the shadows who plow ahead in life, living a fulfilled existence, if at a loss in material wealth. From these people come stories of an earlier time, filled with elements of danger, raw survival and of true heroes that never intended to be. They can weave first hand accounts of sadness, happiness, misfortune and unexpected bliss. They are a sea people on a small dot of land that have lived a life winning against the forces of nature. They have had it rough. They have had only themselves to smooth the rough edges and they are still winning the battle day by day.

Välemaa is a Finnish word and the people trace their roots back to Finland and Sweden. A few have some Estonian and Latvian relations. In most instances these are long forgotten family that the living never knew. They think the first settlement came in the 1500s or 1600s when fishermen would camp on the island but they do not know when the island was permanently settled. From our best guess, it was the 1600s. As was the case in those days, isolation was the rule. That evidence was known from a Finnish hymn book from three centuries prior that was still in use in the church until World War II. Naturally the book was Lutheran in influence but the church service, it was noted, was not seemingly Lutheran. Yes, some elements were, but it was without denominational guidance.

Välemaa means ‘deft or sprightly land or country’. The people were always so energetic, creative and resourceful, always jubilantly happy at receiving the rare visitor that stumbled upon their home, the name was applied and the sandbank became known as Välemaa. It seems the inhabitants appreciated the name as well and began to call their previously unnamed land Välemaa.

There are no shops or stores on the island and no other services. Medical emergencies are met by trying to hail a nearby ship to evacuate an ill islander. There is no police protection and the school no longer functions.

Government plays much less of a function here than other places. With no formal government, the men who coordinate the weekly church services, acting collectively in conducting the worship service and as elders of the church (there is not parish preacher assigned to the church) tack on the governing administrative services as well. For the most part this includes looking in on the aged and coordinating help for households that need some help whether it be in the form of labor or a meal. These elders act as mere coordinators who make the population aware of any needs and rely on volunteerism in the community to meet the need. They are the ones who see that the sick get medical attention and generally try to improve life in the community. For an example, at the weekly church service, an elder announced the need for help in improving the road. About a dozen or more showed up with rakes, shovels and other hand tools to begin filing in potholes on the track than stretches across the island. The road had become muddied and pothole ridden so that a ride in a horse-drawn cart was a bone shaking experience. In a few weeks, through the work of many islanders, the road was improved.

As a small community, local gatherings replace long nights with nothing to do. A community building, converted from a barn, serves as a social focal point. Once or twice a week, the community holds a gathering. Frequently attendees bring food and make it an evening.

The most favored entertainment is making music with handbells. The bell is likely the earliest form of musical instrument. Early in the 1900s or possibly in the late 1800s, the parish priest forged handbells and introduced the children of the island to the music of the handbell. Soon, the youth would perform one hymn in each service while the adults took communion. Soon the beautiful sound of the bells was heard all over. The islanders had bells for all their animals and even created wind chimes for the smallest bells. The adults soon took up the handbells and began performing their archaic folk songs. A church bell, the gift of the priest who introduced the handbell, rings to announce every service and each emergency. The claim is the bell can be heard everywhere on the island, a feat we question as the sound would have to carry at least a couple of miles.

Recently, there have been attempts to raise some cash for needed island improvements. The first project was a booklet of local recipes. The unique booklet was made by hand, tied with string and handwritten. Several hundred have sold. Coins are being planned as well as a CD of the community handbell ensemble. Other ideas are being considered. My suggestion of a newsletter was met with the lack of postal services and sporadic visits that allow mail on and off the island.

There is a local coin.  A local Penni or Pfennig is used on the island.  The money suppy for the small coin is small given its actual value of 3,600 per troy pound of silver.  The money supply is stated at 9,352 Pennia or Pfennigs.

In coin shortages, some paper notes have circulated, especially after supplies arrive on the island.