All of the above coins are sold out.

1 Asper ND Same as above in white

2 Aspers ND Same as above in white

3 Aspers ND Same as above in white

4 Aspers ND Same as above in white

5 Aspers ND Same as above in white

10 Aspers ND Same as above in white

15 Aspers ND Same as above in white

20 Aspers ND Same as above in white 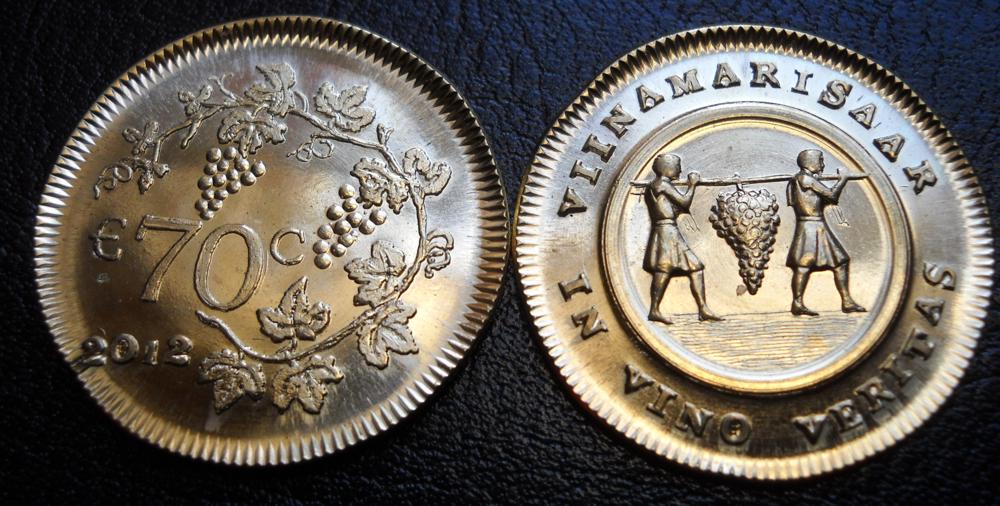 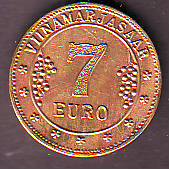 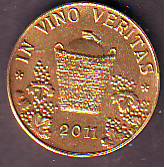 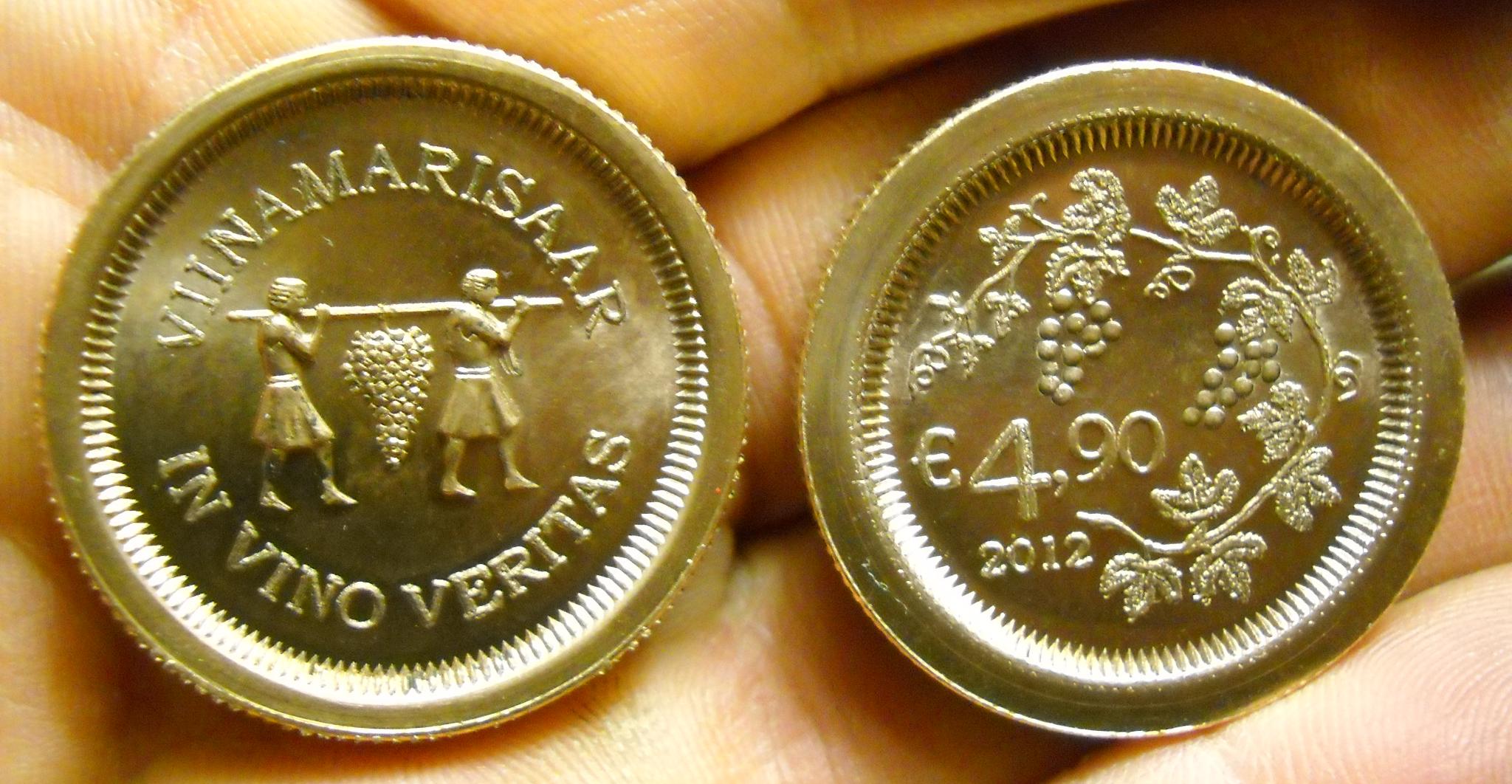 The 4.90 Euro is available in the Web Store. 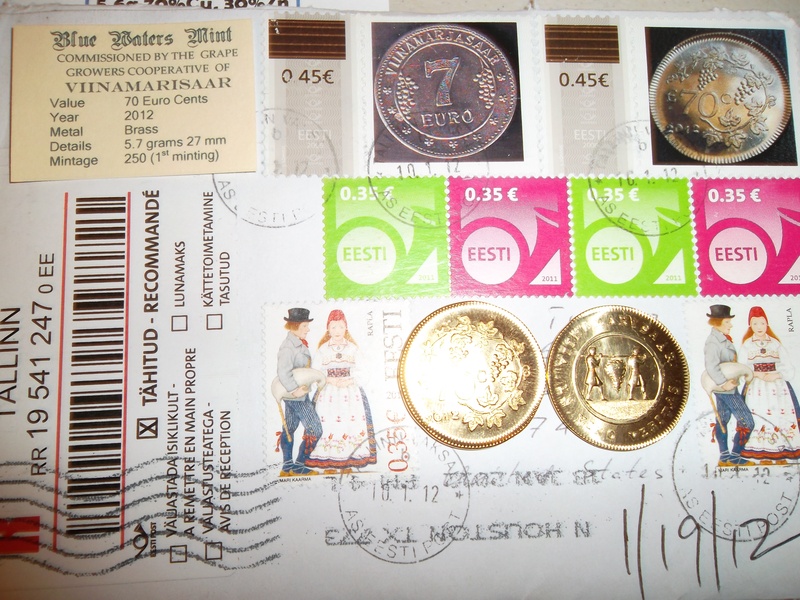 CHECK THE STAMPS AT THE TOP OF THIS LETTER!  Cool 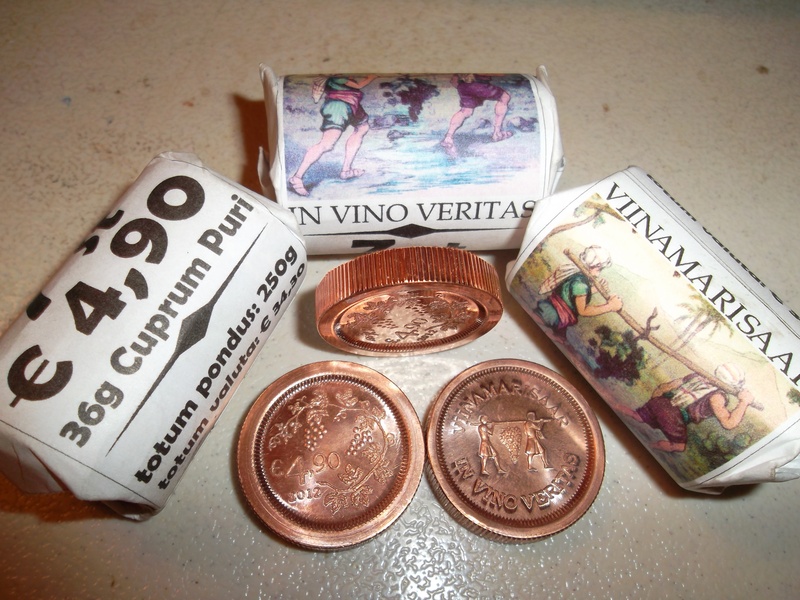 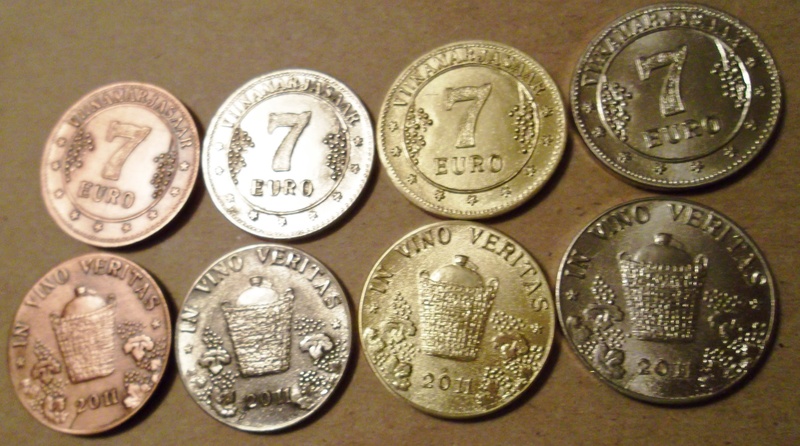 Viinamarisaar is a small island in the Baltic Sea. It's name in English is Grape Island.

Viinamarisaar, except for a short time during World War II, has been inhabited since the 1300s. The original settlers were Swedes who lived an isolated pastoral life on the island.

Baltic Sea Islands have a long history of inhabitation. Many operated as tight knit self-sufficient communities that were completely isolated from the world. Some of the more well known islands included Ruhnu, Parkis and Saarnaki. In each instance they were Swedish-speaking. They fished, cultivated the land and raised cattle.

While research on Viinamarisaar does not specifically indicate, it is likely the islanders were much like those who lived on the well documented Ruhnu. Radio Sweden went to Ruhnu in the early 1940s finding the lifestyle had changed little in over 400 years. They were a religious people living by a strict code of conduct not unlike the Swedes of the 1500s. They had little contact with the outside world and lived self-sufficient simple lives in a number of communities on Ruhnu. Indeed, their lifestyle differed little from the British isles where crofting was the mainstay. The lifestyle was not so unlike the Amish found mostly in the United States of America and Canada.

Fearing invasion, the islanders fled the island during World War II. It was not until the late 1940s when the first families returned to Viinamarisaar accompanied by a small number of Estonians.

Operating as a farm cooperative, Viinamarisaar floundered until residents realized grapes could produce the funds needed to make Viinamarisaar more prosperous. While Baltic storms affected the crop some years, overall, grape growing was deemed a success. This was an unusual choice and critics claimed grapes could not be grown in such a harsh climate. While it is true for most varieties, a few grape varieties are hardy enough to flourish in the Baltic climate.

More and more grapevines were started on the island until finally, aside from patches of land dedicated to grazing and gardens, the island was covered by vineyards.

Even during Russian rule, Viinamarisaar was an outpost that experienced little contact with the outside world. With the fall of the Soviet Nation, Viinamarisaar suffered. The trade partners were now looking at an uncertain economy and an uncertain government. The residents of Viinamarisaar had few markets for their grapes, so winemaking began.

Winemaking on the island has always been on a very small scale. Economics demanded small outputs and the market viewed Viinamarisaar wines as a rare find, resulting in very good prices. Viinamarisaar exclusively produces "ice wine". Ice wine is made from grapes picked while frozen and crushed while frozen. Most of these grapes are sold to wineries wholesale.

During a typical year about 400 cases of 375 ml. bottles of Viinamarisaar ice wines are produced on the island. Ice wines are made from the Vidal Blanc grape. The wine generally fetches about 300 Euros per case through direct sale from the island. Unfortunately, direct sales to individuals are not permitted. Buyers must be licensed companies. Visitors to Viinamarisaar, however, can purchase the wine at generally around 25 Euros per bottle.

The wine is called a 'new wine' and it is intended to be consumed after purchase. The alcohol level is 11.5%.

The island still operates as a farm cooperative in some respects. While land is now owned by families, a central organization oversees the marketing of Viinamarisaar grapes and wines. The organization secures good prices on the items needed to operate a vineyard. This includes hired specialists. All landowners are members of the cooperative. All employees on the island work for the cooperative in lieu of the landowner.

With no bank on the island, the availability of money is limited. After all, cooperative bank accounts are off-shore and those buying Viinamarisaar products use a more efficient mode of payment than cash.

The cash shortage was met with a local currency that can be exchanged on the island or even cashed in at the cooperative office for a paper cheque if going off the island. Initially, after the collapse of the Soviet Union, the paper notes were deemed worthless but after the newly formed cooperative found a couple of markets for the products produced on Viinamarisaar, the notes were considered a local currency, especially when the cooperative would gladly write a cheque for those notes cashed in.

Initially crudely made paper notes denominated in Aspers were circulated. These ranged from thin white notes to sturdy paper chits not much more than about an inch square. Several other styles were circulated as needed. Few have survived the last decade.

Wooden tokens appeared several years ago to replace paper notes. The last of these were denominated in Krooni. Like the paper notes, the wooden coinage is becoming harder to find each year.

Finally in 2007, metal coins were made. The coins were not only intended for local circulation but also for coin collectors. The coins are offered in several metals but all coins are denominated at 7 Krooni.

The denomination, 7 Krooni, represents the pay for a lug of grapes (about 30 pounds). A slow worker picks about 20 lugs a day, but the best pickers can pick 40 to 50 lugs

Viinamarisaar has chosen to issue a coin in Euros as nations like Estonia adopted the monetary unit as of January 1, 2011.  A 2011 coin in the denomination of 70 cents Euro, was being minted.  It was not expected to be completed by January 1, so we wonder if some temporary notes or tokens might appear later, utilized to fill the gap between the January 1, 2011 and the actual release date of the 2011 metal coin.

As 2012 dawned, Viinamarisaar put the 70 Euro Cents Brass 27 millimeter, 5 gram coin into circulation.  The initial mintage was 250.  At the same time, arrangements are being finalized to have the 7 Euro coins (the wholesale price of a bottle of wine produced on Viinamarisaar) placed in circulation.  Word just received in the last days of 2011 is yet another denomination, a 36 gram copper 39 millimeter coin denominated at 4.9 Euros or the pay for 7 tray of grapes picked by workers.  A typical picker can earn one of these coins for about 2 hours of work.

This influx of coins, according to the Cooperative that produces the coins, is an attempt to show support for the Euro currency by issuing coins backed by the previous harvest.  One report was some 70,000 Euros in coins would be produced although we cannot locate a second source to verify this at this time.

Today various vineyards dot the island, owned by the extended families that own the land. Each family dedicates a portion of their land for gardens and cattle.

There is still the sense of true isolation on Viinamarisaar even as the islanders go about their daily chores coupled with plenty of social interaction. On Viinamarisaar the facts remains, you're a good distance from anywhere and no roads lead to Viinamarisaar.