Lind is valued at 1 Half Penny, British however, value based on pre-decimal Pound and original silver ‘value’ of 1/480 of 12 Troy Ounces of Silver.

All notes are sold out. 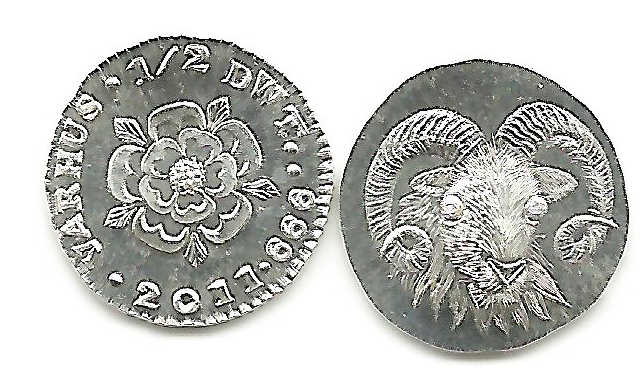 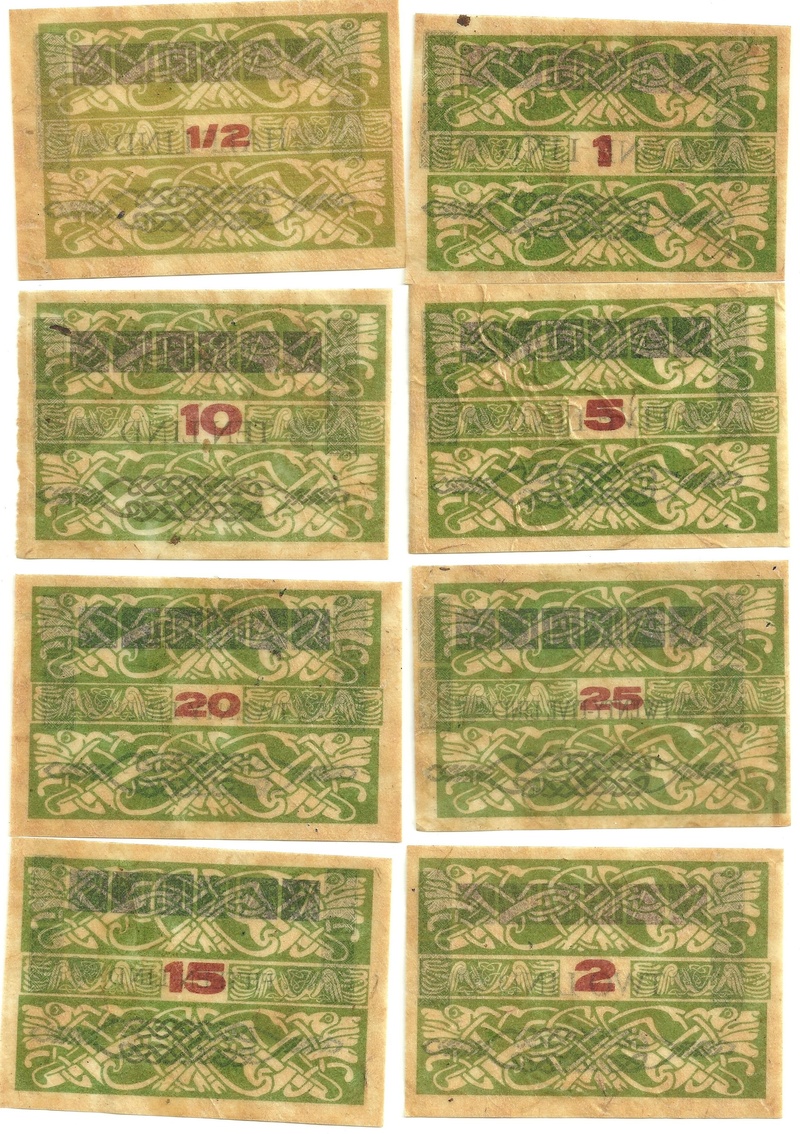 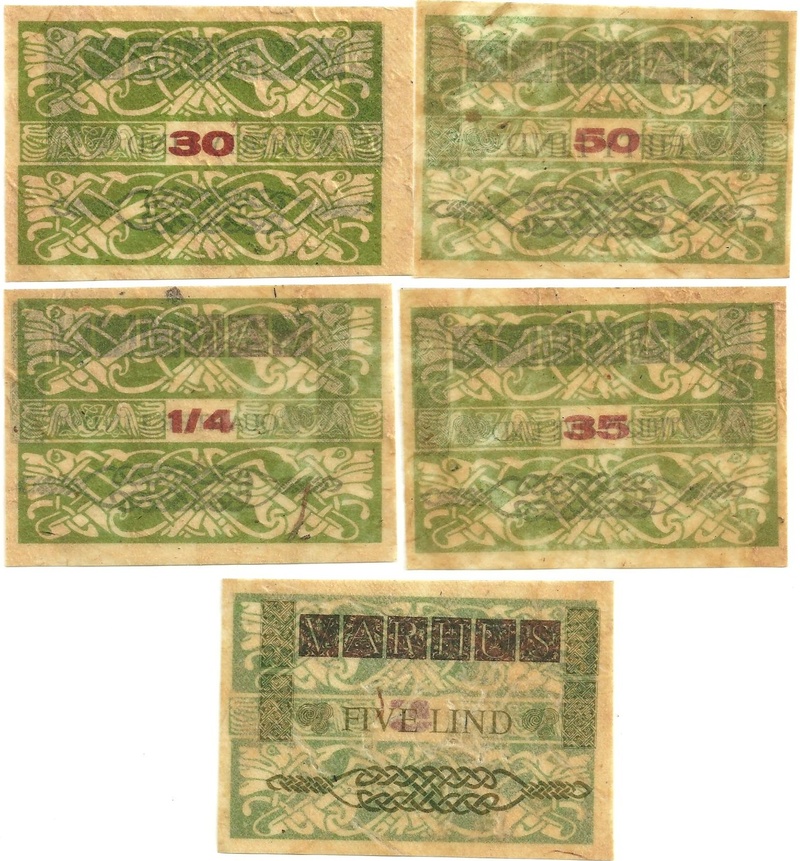 It is anyone's guess how Varhús, meaning Spring House in English, was first settled. Many theories by historians abound, but one of the most likely theories is a shipwreck. It has been noted that several North Atlantic island people came to settle on islands by being marooned. Navigating vessels is difficult with rocky outcrops hiding just under waters around these islands.

Records have been found to show Varhús has been known since about 1370, being claimed by a family thought to be of Norwegian heritage. Records of population have been found as early as 1571.

One theory is that a stone bunker built over one of the many freshwater springs on the island denotes how the island was named. It is thought many a ship would stop at Varhús to replenish or take supplies. In this part of the Atlantic, storms can wreak havoc on shipping.

To add to this mystery, the island appeared to be uninhabited according to an account in the mid-1600s. Scholars point out that the number of islands that dot the North Atlantic could allow for 'mistakes'. There is some question if the account is correct.

Visits provides sketches of life on Varhús. In 1597 it was said the people fished from shore, raised cattle and farmed, stating not one boat was found. They claim the population was 180. Later, in the early 1600s, a smallpox epidemic struck the population, estimated at about 200, killing all but about 20 of the inhabitants.

Some believe the owner of Varhús might have recruited some families to move to Varhús but local records do not make any mention of this, leading us to suspect the validity of such a claim. However, by about 1670 the population had recovered to 88 and stood at 100 by 1700.

Looking ahead, one year in the 1830s took its toll on the islanders. Numbering about 150 as winter set in, a horrible weather year wiped out 50 of the people. The winter, being well documented, resulted in 30 snowstorms beginning in November. One writing claims high winds and constant storms prevented any outside activity from the New Year until Summermill Day in mid-April. It was not until Midsummer Day that the ground could be worked. The year was noted for violent storms that seemed to come out of nowhere with virtually no warning. It became known as the year of famine.

In 1865, the population had recovered to about 165 but a ship captain's log noted that the islanders seemed poorly dressed, undernourished and more as meager savages. Part of this scathing account might be associated with his note that there had been no marriages for seven years and no illegitimate children born on the island. He noted them as friendly, efficient and very giving of what little they had.

One captain of a ship noted “...in every respect the inhabitants seem to be much at their ease, are decently clothed, and are of a cheerful, inquisitive character. Indeed, their frank, free disposition, simple primitive manners, render them a very amiable people”.

The 1900s brought dramatic changes to Varhús. Ships began trading with the islanders and many of the young were lured to the great unknown world. The population began to decline rapidly.

Today Varhús is a community of 28 people, give or take a couple who might be temporarily away from home. The inhabitants are known for their light skin and hair with blue or green eyes. They tend to be tall and graceful. The inhabitants are fluent in Old Norse and English. The population survives through self sufficient farming and raising animals including chickens, cows and sheep.
Varhús is populated by folks thought to be descendents of Viking or Scandinavian origin. For certain, their language qualifies as a dialect of Old Norse. Their customs speak of centuries old traditions and celebrations long forgotten. They even adhere to the Julian Calendar, celebrating Christmas on January 5 and New Year's on January 12 according to the Gregorian calendar.

The island is governed by the men of the island who collectively make decisions for the inhabitants. All adult males may be involved in all decisions from what work needs to be done to judging of infractions between residents.

The islanders live in stone houses with iron roofs, noted for their soil and grass covered roofs.
The religious beliefs are Christian but the islanders do not claim any specific religious affiliation. Some superstitious beliefs are still strong and resemble old Scandinavian and British beliefs from pre-Christian times.

The people of Varhús croft for a living. Crofting is small-scale subsistence farming and can be described as a way of life for entire communities by influencing village life and providing a modest income or agricultural produce for the crofters that work the land.

The hardy islanders have for centuries worked in a cooperative manner, insuring no neighbor does without and has built a tradition of social networking including frequent community dinners and dances.

All the houses on Varhús have a large kitchen, with enough room to dance a set or to wake a corpse, an adjoining "lower room", and in some cases an "upper room" behind the hearth wall. The kitchen had to be large enough to accommodate animals at night or during bad weather, but today barns house the animals. There was a loft above the lower room in some houses and a narrow loft above the fire for storing nets, fishing lines, trawl lines and other goods. Homes generally were built to the back of the hill with doors opening to the south. The objective was to protect the home from north winds that tend to howl down the hillside at much greater speed than the sustained wind.

Varhús has been a “free island” since the 1600s. As is the case with all islands in the North Atlantic at the time, each island had an owner. The people on the island had to pay the owner an annual ‘rent’ to live on the island. In most respects, these were tiny kingdoms with absentee rulers, although they typically had a home on the island that was occupied every year or so when the ruler collected the rent. In many cases, the ruler used some of the funds collected to assist the islanders when needed.

Varhús became independent in an unusual manner. “Ole” (full name unknown) was the owner of Varhús. While well liked by the islanders as a fair and compassionate landlord, this is not to indicate he was loved and admired. Indeed it was a love-hate relationship. “Ole” and his wife had no children. He was an only son. On one of his visits to Varhús he was ill upon arrival. Two days later he died. His wife never exerted control over the island and never again was rent collected. The landlord’s home was torn down in the 1700s.

Varhús has had a couple of interesting developments as life has evolved on the island. It seems a passing French vessel brought ‘stiff drink’ to the island and trading for alcohol was common. Finally, once the islanders realized that alcohol threatened the ability to trade for goods vital to life on the island, alcohol was banned.

Over the centuries, at times, the church had a resident pastor. Once such pastor from Scotland greatly disrupted social life. He reigned as a dictator of sorts, affecting daily life on the island. Musically, for example, the long winter nights were enjoyed with dances. The preacher outlawed the use of musical instruments and dancing. Dancing in this case, is a bit unusual. On Varhús a singer would tell a story while the islanders in a circle would act out the lyrics. The story dance vocals are still a part of life on Varhús.

Varhús was known as a place where neighbors would never go without a “spot of milk” and generosity poured out in good times and bad.

Varhús is a rocky northern island with steep inclines and grassy terrain dotted by small bodies of water. Covering 3,128 acres, Varhús is an isolated island between Iceland, Norway and Scotland in the open seas. The island is some 2.5 miles wide at it's widest and 3.5 miles long. The name, Varhús, means Spring House, likely so named because of the stone one-room structure built around the strongest spring found on the island.

Varhús has mostly sheer cliffs along all it's shoreline with the exception of a couple of tiny coves and the southeastern end of the island that gently slopes to the sea. The highest elevation is about 1,200 feet.

The cliffs have numerous caves that have been explored in the past by inhabitants who were lowered by rope. Various birdlife occupies the caves and uplands.

Varhús is known for its numerous springs found in the lower elevation areas. Some 16 springs are present but only 4 flow constantly, providing ample water for the community, for gardening and livestock. A hot spring is found between the two highest elevation hills. The inhabitants have built two rock bathing pools that overlook one of the island’s tiny coves.

Varhús is known for its more dismal climate of constant wind, many cloudy days and very plentiful rain. For days on end, Varhú s can suffer from strong winds and heavy rain. Snow falls several times a year and in winter, it is not too unusual for rain to freeze as it falls. In contrast, when good weather arrives, it is usually for a week or more.

Shipping is a problem due to a reef that lies only a few feet below the surface of the sea. A number of shipwrecks have occurred over the centuries. There is the opinion that the reef has prevented the island from occupation over the centuries, including World War II.

Unlike many northern islands, the sloping from north to south has resulted in fairly rich soils on the southern end of the island where most farming and gardening occurs. Due to it’s rocky base, the island does not have pockets of mucky terrain that some visitors to such northern islands claim are almost like quicksand.

There has been little need for money on Varhús during the years and most families merely traded goods with passing ships to gain the few coins needed to pay their annual tax to the island’s landlord in early days or to buy goods in later years. By the 1920s, money began to change hands.

In the beginning, the lime trees grown outside in good weather and indoors in winter acted as a currency of sorts. As the need for money arose, notes valued in Limes or Lind were circulated. The going rate was a Half Penny per lime. As a side note, the lime tree, grown in protected environments, was brought to Varhús because it was noted the islanders were in need of the citrus as it was lacking in their diet. Before the lime tree, many children died before reaching adulthood.

As time went on, the island desired a more convertible currency and opted for silver coins. Being people of great integrity and a love for tradition, realized the early British Pound had been 12 Troy Ounces of .999 Silver in its early days and decided to issue small silver coins of exactly ½ pennyweight in .999 silver.

Foreign coins are used for purchases from passing ships and off island purchases but the only coin accepted on Varhus is their own. As the islanders joke, it might take a big bag of coins to buy something with a big price tag, but that is the Varhus way! This is REAL money, not a fiat currency.

The currency is vital to Varhús as the island now produces, collectively just over $1 Million US dollars each year in income.

In another move, a true silver ½ Penny at ¼ gram of pure silver is being planned by the islanders. It is a customary payment for a small mug of ale.