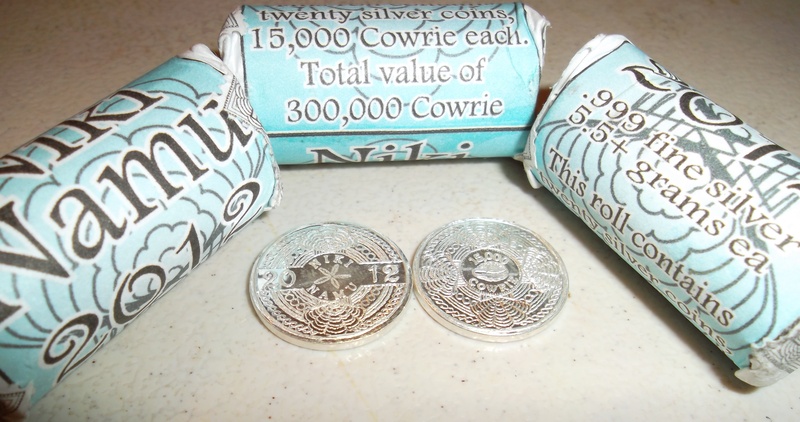 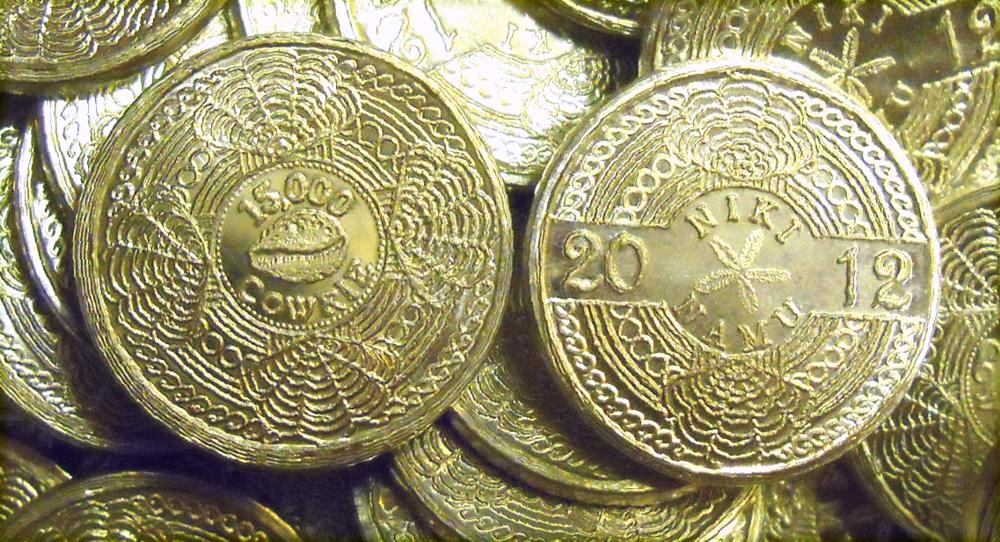 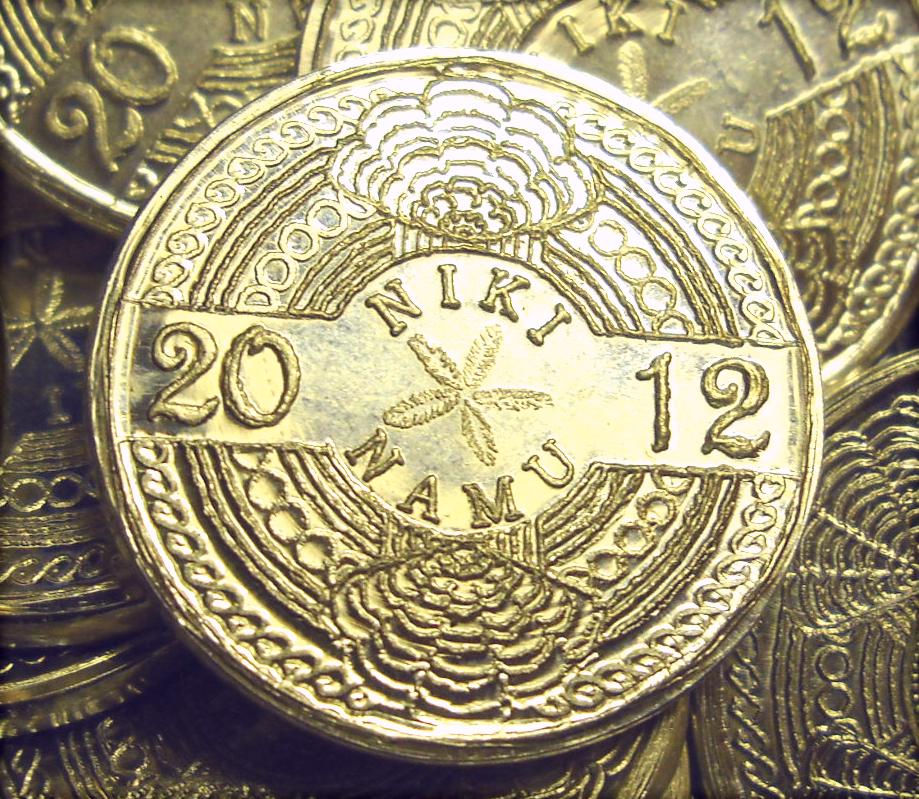 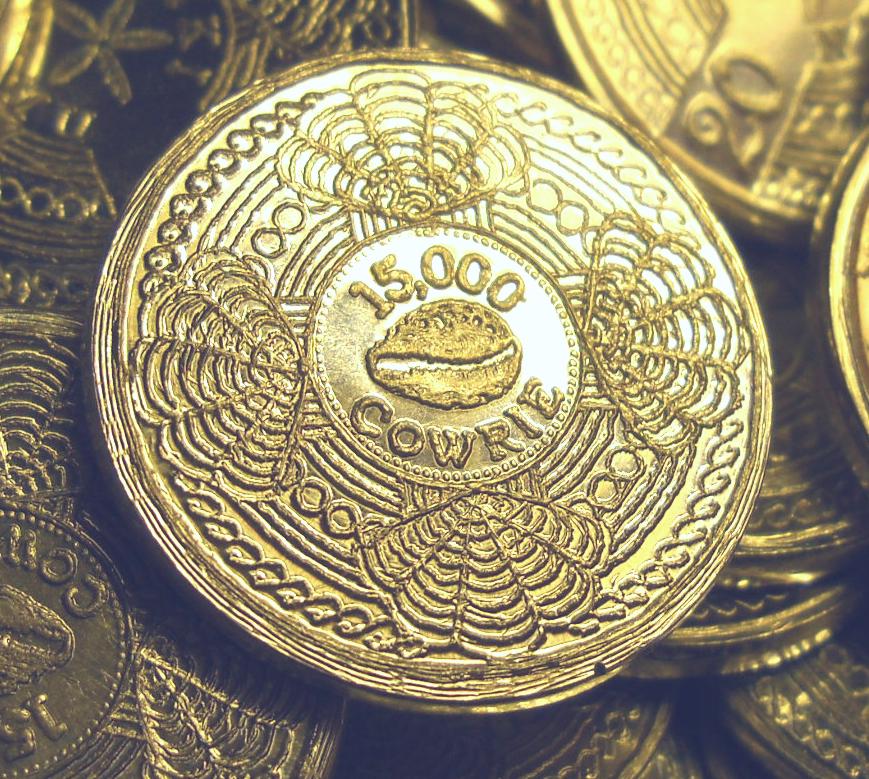 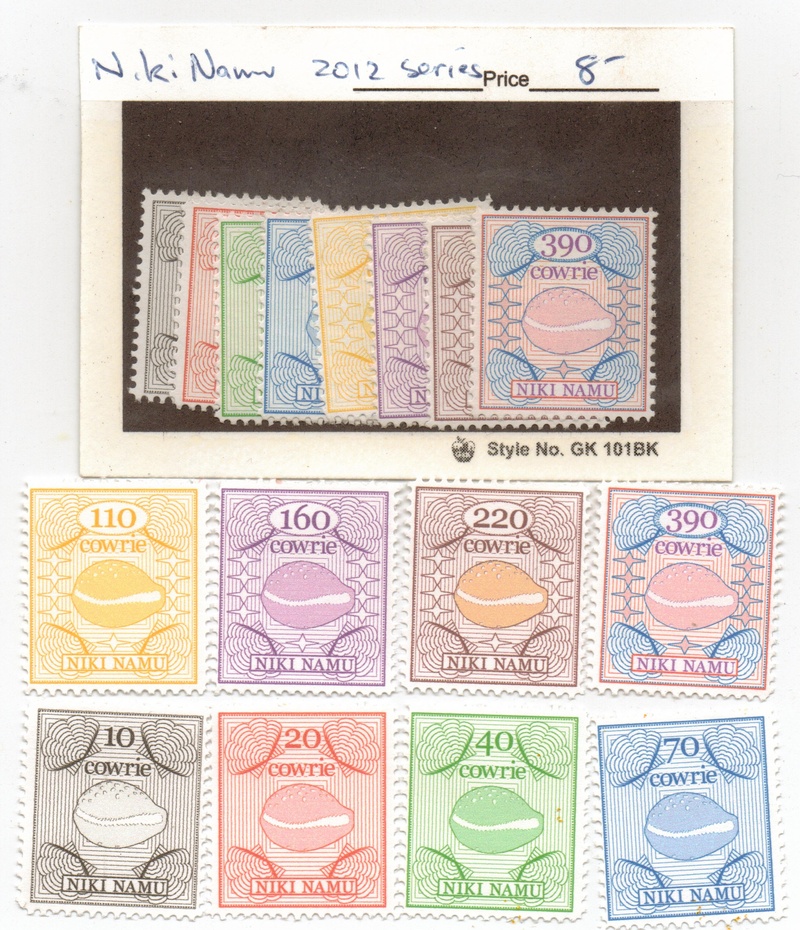 Above ...need to mail something on Niki Namu.  Stamps will be introduced in a number of denominations when the coin is released July 1, 2012. It seems hard to grasp that as the internet has made the world such a small place that peoples tucked away at various spots are conveniently undetected by the long arm of the internet.  One such place is Niki Namu.

It isn’t that Niki Namu is trying to stay a well kept secret.  After all it might very well be called the farmers market of the region although it is still an isolated island.

Joining Niki Namu are places like Hatohobei and Anuta, mere dots nobody knows about and so isolated that is likely to remain the case for many years to come.

Niki Namu is a small fish among an ocean of scattered islands. At a mere 870 acres, it is about 3 miles in length and about half a mile wide on average.  While not a flat island, it does have rolling hills rising 50 to perhaps 70 feet above sea level.  A couple of nice coves offer the islands beaches and protection from the ocean waves.  The soil is rich volcanic soil and springs give ample water.  Plentiful rainfall and tropical climate allow the island to produce more food per acre than any island in the area.. The lack on introduced species has left the island free from rats and other animals that wreak havoc on some islands.

Niki Namu’s waters teem with fish and it has been said except for the Maldive Islands, it has the largest harvest of cowrie shells.  It is true that money does not grow on trees but you can scoop it up in the ocean on Niki Namu.

Niki Namu’s obscurity to the outside world is baffling.  Niki Namu has had a very brisk trade in produce.  Niki Namu has always been bountiful.  Thus, the island is known in the region for its top quality foods.  The cattle, pigs and chickens have a reputation of superior quality.  The plentiful species of fruits and even garden vegetables has been non-stop.  Always known as the most flavorful, it may be due to smart farming practices put in place possibly centuries ago.  The islanders are even dressed to the nines in traditional garb thanks to the rich soils.  It is very accurate when said Niki Namu is a Garden of Eden.  The plan of saving seeds and storing foods in dugouts in the event of catastrophic weather events has served the islanders well.

With all this going for the islanders, it remains a mystery their reputation has not brought them ’front and center’ to the limelight of an international audience.  It makes one wonder why no government does not staunchly claim the island as it lies amid a dissecting group of imaginary lines that depict the territorial claims of three nations, holding Niki Namu in limbo as an independent nation, even if not of the islander’s own accord.  Naturally, in previous times, such an island remained unchallenged by a distant overseer and today, Niki Namu, is for the most part, blessed to be in that condition of autonomy.  Simply put, any government that would bother would need Niki Namu more than it needs them.  They have done very well on their own without intervention.  Simply put, Niki Namu’s system is not broken and doesn’t need to be fixed.

We do know from researching the region that Polynesian settlements are found dotting the area.  They are termed ’Polynesian Outliers’ because they are so distant from other Polynesian islands.  Niki Namu, however, while claiming Polynesian roots, is certainly not purely Polynesian.  We don’t know what that is, but pull from some random facts to present a plausible possibility.

The language is a true mystery.  It is neither Polynesian nor related to a regional language of which there are many.  Nobody has an explanation as to how this isolated, yet very simplistic language came about.  Containing few letters and sounds, the language is unrelated to neighboring islands.  One interesting paper suggested that white men settled on the island and invented the language as time went along.  That’s a stretch but I can see that as more possible as it seems on the surface.  You see, a small island like Niki Namu with such a small number of people would eagerly welcome change.  Anything changing the daily routine is a hot topic.  Remember, on some visits of white men to Polynesian islands they were mistakenly seen as gods or angels, making locals want to adopt everything they do.  So, it might be possible the Niki Namu language is a pidgin version of the original language modified by the native language of the possible white settlers.  One source noted: "It shares some basic features with local lingua francas such as New-Guinea Tok Pisin pidgin and Malay-Indonesian. The Niki Namu language’s grammar consists of only eight tags made of a semivowel and a vowel. All other words are made of two syllables, each made of one of seven consonants and one of five vowels. The language is "a priori", meaning that the words are not drawn from other natural languages."

At some point in the chain of events on Niki Namu, the locals learned the English language and to some lesser extent, the western ways.  We have to ponder how this happened and the most likely scenario would be missionaries, likely from the London Missionary Society.  Still, there is no ‘clear’ point in time nor reason for the people to convert to Christian principals, to pick up the written form of language and to begin schools to teach the youth.  These details are missing in action.

In fact, very little on Niki Namu has even been known until a New Zealand couple decided to drop out of modern society for a life on Niki Namu.  Avid divers and sailors, they erected a 3 room resort, offered diving and surfing to an elite group of surfers and divers seeking out new locations.

It might be said the Robinsons took giant steps in bringing Niki Namu into modern society.  They introduced commerce, a select small group of tourists, the idea of money and the cash economy.  It was not that the Robinsons sought to change the people as they were resolved to take on the island ways.  Still, the islanders wanted to adopt some of the Robinson’s way of life.  The result was a pretty nice middle ground.  If anything, the Niki Namu islander understands the modern world better than the modern world knows them.

As you might suspect, as modern days rolled on, the importance of the culture became evident to the chiefs on the island and some symbolic steps were taken to evolve the past into today’s life.  A few symbolic gestures make to remind islanders of their past.

The Robinsons are gone from Niki Namu, now back in New Zealand.  Their near decade-long life on Niki Namu came to an abrupt end with a tsunami caused by a major earthquake.  Most of Niki Namu’s coast is raised about 10 to 30 feet above sea level.  Only a couple of coves open the island to sea level beaches and these were the only areas damaged by the tsunami.  At the larger cove, the Robinson’s small resort was damaged beyond repair by the crashing waves.  In the aftermath, the Robinsons took their insurance money and returned to New Zealand.  It has been said the resort had been uninsured making it unaffordable to rebuild.  This meant the end of direct western world influence for the island.  The result was the adoption of some western ways.  Today Niki Namu is governed by the chiefs as it has always been and life moves forward.

The population of Niki Namu is 574.  Their lush island and surrounding waters account for a bit less than $7 million dollars annually in exports.  Ironically, some of this is the sale of cowrie shells as some neighboring islands still use the shells as money, just as is done on Niki Namu.

The Cowrie Shell has always been the legal tender on Niki Namu except a second currency was in place during the time the Robinsons lived there.  The Robinsons introduced banknotes, a paper scrip denominated in Tenali, or money (Tenali technically is not cowrie shells but a metal or paper form of money recognized off the island).  Tenali simply means ‘money’.

To introduce the ‘Tenali’ to the population, the Robinsons, under the blessings of the Chiefs, allocated an equal amount to every islander.  They could set the price for anything for sale and exchange it for the paper notes the Robinsons had made.  This ‘fiat’ currency had no backing or exchange rate off the island.  In a short time, the growing pains of money were evident.  Some refused the paper as a payment only to have their Chiefs order the exchange.  When supplies came, one could buy a bag of rice for a few Tenalis and when supplies ran short, the price went through the roof.  In a short time, only a few had most of the money.  Indeed it was a stereotypical result.  As the Robinsons explained, it was to be a living lesson on managing one’s finances.  In short, the experiment taught valuable lessons for the islanders, especially on staying prepared for the unexpected and how to offset impulse urges to tend to the most important affairs.  The Tenali was never intended to be more than an experiment and teacher of economics.  In reality, the true purpose of the Tenali was to sell as souvenirs to the divers and surfers.

So, what was the Tenali worth?  The Robinsons would have said whatever the cost of the last item sold.

After the departure of the Robinsons, the cowrie shell became the only money on Niki Namu but a lesson had been learned.  There was tenali to be had if Niki Namu minted its own coins for the collectors of the world.  With 2012, Niki Namu realizes that plan with the first coin denominated in cowries, 15,000, to be exact, made of pure silver based on the real value of the cowrie shell itself:  183 per grain of pure silver.  Naturally, cowrie shells vary in size so the stipulation is each bundle be as equal as feasible.  A cup that holds 183 shells in theory should be filled to a line in the cup.  If the shells don’t come to the line, there are too many small shells in the lot and if it is above that line, there are too many large shells in the lot.

The silver coins have the rustic charm of the tropical island and weigh on average 5.6 grams of .999 silver.  Six different issues are planned.  The mintages are quite limited.

As of this writing, aside from the few visitors who came to dive or surf, only those who maintain contact with someone on Niki Namu are able to obtain any paper notes or coins for  the world’s collectors.