All of the above coins available for sale. Please click WEB STORE at right.

* Very difficult to describe. Has almost a felt-like feel and is not stiff nor fragile. Reminds me of some of the inside linings of old hardback books.

None of the paper notes are available. 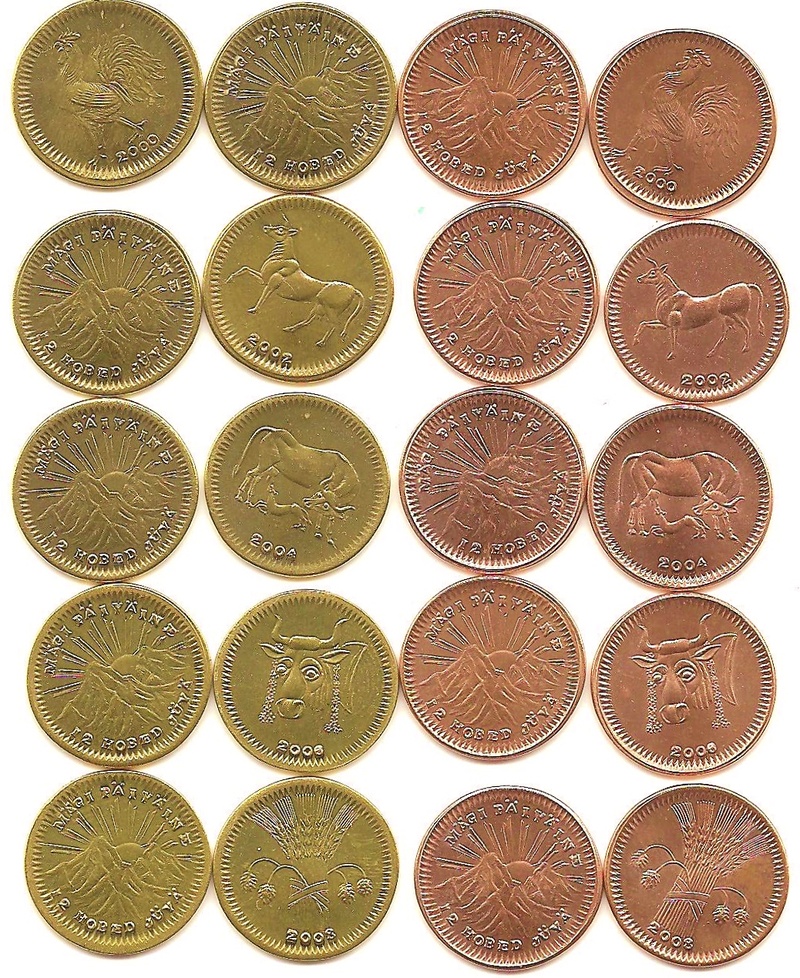 If you have nerves of steel, patience and time, you can follow the lone dirt track over steep, rugged mountains and transverse the rapidly moving valley rivers to Mägi Päiväine, meaning Mountain Sun in the English Language.

It can be said that Mägi Päiväine is one of the most isolated places on earth, but once there, you'll discover a beautiful valley with rich soils and plenty of pure water. The surrounding mountains hide lakes of pure water and serve as a summer pasture for livestock. Still Mägi Päiväine is an exercise in survival against the elements. Her people have survived the harshness of mother nature and reaped her bounty. In short, they have carved out an uneventful but peaceful self-sufficient life.

Mägi Päiväine's borders are hard to define. You see, the folks who call Mägi Päiväine home have lived here for generations with very little contact with the outside world. The high mountain valley and surrounding area has never been officially claimed, in person anyway. The size of Mägi Päiväine depends on who you ask. For certain, it does include the entire settlement valley and the land grazed by the cattle. The valley and pastures cover some 10 square miles.

Magi Paivainne is considered beautiful with steep mountains. Water is plentiful and a number of springs provide a bounty of very fresh water in the form of small streams and even a couple of small lakes. Valley soil is rich, producing good crops. The mountains offer excellent grazing in spring and summer.

Locating Mägi Päiväine on a map is going to be impossible. It is unrecognized. In fact, local old timers claim the communists began displacing the Veps and Ingrians after the Soviets came to power. Many went to Finland. The Veps and their neighbors, the Karelians and the Ingrians were considered a threat to national security. The Soviet solution was moving small communities to different areas. The people of Mägi Päiväine say they originally are from the Northwest Vologda district. It is told they sought isolation as a protection from the Soviets. So, the high mountain valley became the new home to this isolated group.

At the end of World War II, a small group of Russian soldiers found Mägi Päiväine. They were tired, hungry and suffering from exposure from the elements. The folks of Mägi Päiväine took them in, tending to the injuries of a couple of soldiers. The show of compassion was just what Mägi Päiväine needed. The returning soldiers set in motion a chain of events that would conditionally allow Mägi Päiväine to exist. Formal papers soon arrived stating Mägi Päiväine was an autonomous region. In essence, it was independence for the people and a guarantee that they could control their destiny so long as they did not interfere with the Soviets.

No records of these papers is found among the former Soviet government, it is told, by the folks of Mägi Päiväine claiming to have the signed papers in the journals that chronicle life in this tiny region. The document grants Mägi Päiväine the right to be responsible for its own affairs and free from taxation from the Soviets as long as they kept to their land and did not interfere with the nearby communities.

Mägi Päiväine is home to about 100 people, living in about 15 households, who speak what many consider to be an almost dead language, Vepsa. They also speak some Karelian and Ingrian. In earlier days the Veps, Karelians and Ingrians lived together. The lifestyle is uneventful. It cannot be said it is an easy life with Mägi Päiväine's harsh climate. In fact, little has changed over the years. Life is simple and self-sufficient. Few have more than they can consume. Luxuries simply are not found. This is a small group of people who are close to the land. What we consider to be obligations or minor celebrations are cause for the whole nation, and I use that word loosely, to stop everything and celebrate together.  Per Capita Income is estimated at $300 US but some feel this may include only the cash economy.  The most realistic figure we have seen is about $600 US per year.

Traditions from earlier times are still alive and well in Magi Paivaine. The longest day of the year is cause of an all night feast and celebration. An after harvest feast, the tradition of May Day and a few others dot the annual calendar. Weddings bring everything to a halt for celebrating. Death stops all activities as everyone mourns. Religion is a part of everyday life. Orthodox Christian beliefs prevail but superstition is active. Watching the sky, certain celestial events are believed to affect life. The activities of certain animals and fowl indicate certain conditions. The list goes on.

Mägi Päiväine homes are fairly simple. There is a family room, kitchen, bedroom for the adults and one for the kids. Typically, a structure nearby acts as a storehouse for food. As families grow, more rooms are added.

Magi Paivaine has one store but no banks or offices. There are no Government offices, medical clinics or Churches. There is no electrical service or other conveniences. There are no police, nor is there an army.

Most merchandise is traded person to person. Religious services are held in homes. Even those selected to carry out the extremely minimal government functions operate from their homes. A school is located in a room built on to the house the teacher lives in. The quality of education is unknown but the population can read and write, using the Latin alphabet.

The Mägi Päiväine government is made up of a council of elders who tend to the functions of government. This council elects a president who serves for a single 5 year term.

The duties of the President are varied and might be summed up as an administrator. The council acts as ruler, judge and advisor. In such a small community, the council has supreme power. There are unusual rules. For example, young men and women must choose a mate that does not live in Mägi Päiväine. This mate must agree to reside in Mägi Päiväine after marriage. This is why many youth seek work in regional communities after schooling ends in Mägi Päiväine. Men tend to do agricultural work while the women generally work at domestic jobs.

There is no crime. Society is European in nature and in values. Most infractions are handed by the parties involved without intervention from the President who acts as judge over matters brought to him by the general population. If the decision of the President is not acceptable to one party, they may request a hearing by the full council with the decision of the council being final.

Mägi Päiväine's Government has assigned the duty of tax collector to the President, but no taxes have ever been levied.

The President hold almost supreme powers tempered by the board but the people can call on the President's ousting. This happened in the 1930s when the President ordered no publication or other form of media could be brought in without his approval. The people demanded the council act and the President was ordered to resign.

The people have small garden plots for the short growing season, much of which is canned for consumption in winter. Cattle is raised, especially for cheese and milk, although meat is much less frequent in the diet. Wheat is grown, providing flour, a staple in the diet along with cheese and milk It can be said the people of Mägi Päiväine are neither rich nor poor. It would seem they have just what they need. This is because they are not a very materialistic society.

The Mägi Päiväine council has in recent years paid for the education of a young man and two young women. The man is now leading the church while one of the women is being schooled in education and one is now a nurse.

With the fall of the Soviet Union, Mägi Päiväine has allowed it's hiding place to be known. The threat of the Soviet Government is gone. Still, those in Mägi Päiväine are leery of outsiders although their friendly attitudes easily chase their fears away.

Magi Paivaine has a long history of peace. In most small communities, there is an undercurrent of friction between families. These less than desirable qualities are not found here as all seem friendly. They seem to realize it takes each member of the community working together to achieve the quality of life Mägi Päiväine enjoys.

One might ask why Mägi Päiväine has remained so isolated. The truth is there is little reason to publicize Mägi Päiväine. It has been queried why the citizens of Mägi Päiväine choose to stay in their isolated valley instead of returning to their homeland. The answer is simple. This is all they know. Even the memories of the oldest citizens is fading.

Local notes have been exchanged over the years using the denomination "poimda" meaning to pick, gather or harvest. It's value is unknown and apparently never compared to other currencies to determine a specific value. It is assumed the value was determined by the person accepting the note as payment.

Coinage for use outside the community has been created recently in the denomination of 12 grains of silver or half a pennyweight. These coins have been minted since 2000, when they were released in anodized niobium, silver, bronze and copper-nickel to commemorate the year 2000. The anodized niobium was so successful, it is included in all successive mintings of 2002, 2004, 2006 and 2008 when bronze, copper-nickel and a different shade of anodized niobium is featured. The coins are approximately 18 millimeters and the number minted has been small. The oddest part about the coin release of 2000 is the amount of silver in the 12 grain coin. In reality, the coin contains around 35 grains of silver, nearly triple the denomination value. 12 Hobed Jüyä is valued at 1/40 of a troy ounce of silver.

In 2010, 12 Hobed Jüyä coins were minted using the dies of the 2000, 2002, 2004, 2006 and 2008 coins in two different metals:  copper and brass.  It is our opinion Mägi Päiväine lacked the funds to commission a new image for 2010 coins and opted to utilize dies from prior years, opting for different metals instead.  There is some reason to suspect the less expensive copper and brass metals where chosen so the coin could be considered for local use versus a release strictly for collectors.