THE FOLLOWING BY PRIVATE SALE

Below are some photos of a beautiful specimen of the Nickel version of the 2007 Klef Raraha coin offered in early 2007 and long sold out.  This is listed as X#1a in the Unusual World Coins Catalog from Krause.  Minting was 100 in Nickel.  The photos are from the owner of the coin and below are his comments.  This rare find is $95.  If you are interested I will put you in touch with the seller since I doubt he wants his email listed here.  His comments:

There are some very fine hair lines & other markings (that can't be seen via these photos) on the "2 E.C. Dollars" side of the coin between 9 & 10 o'clock of the out side perimeter & one other mark that appears to be what I would call a "die characteristic" only I'm not sure that the method of manufacture of this coin involved a die. Under 5X magnification scratches become evident in the center cream colored enamel work on both sides. On the "shen Ana" side of the coin there are small contact marks at between 8 & 9 o'clock of the outside perimeter . The 1st one's mentioned are the only one's really noticeable to the naked eye. This "coin" is not usual & therefore grading it as you would a "regular coin" could be somewhat misleading. I'd give it a MS or Proof 65 + designation which would be conservative, I think. 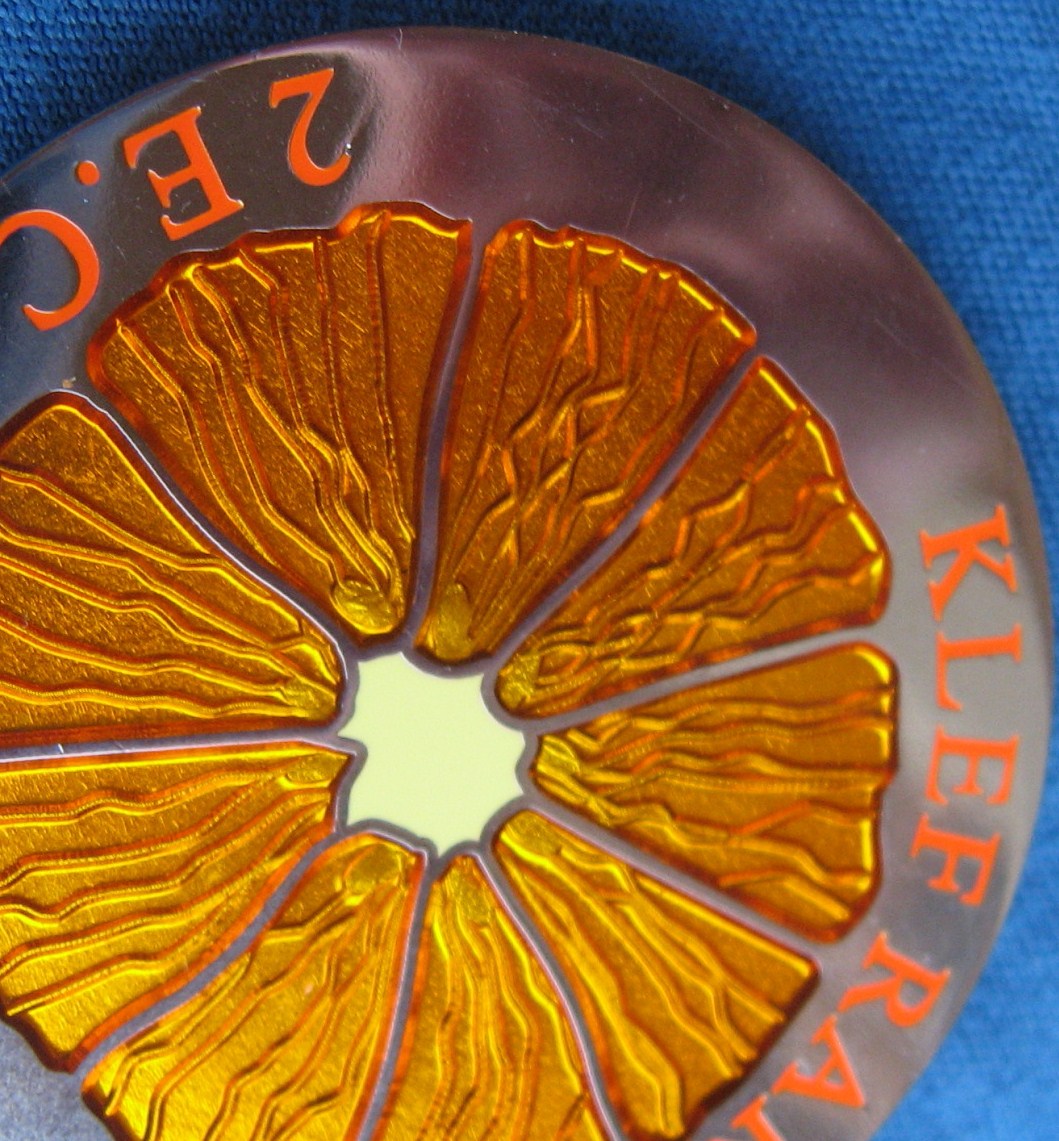 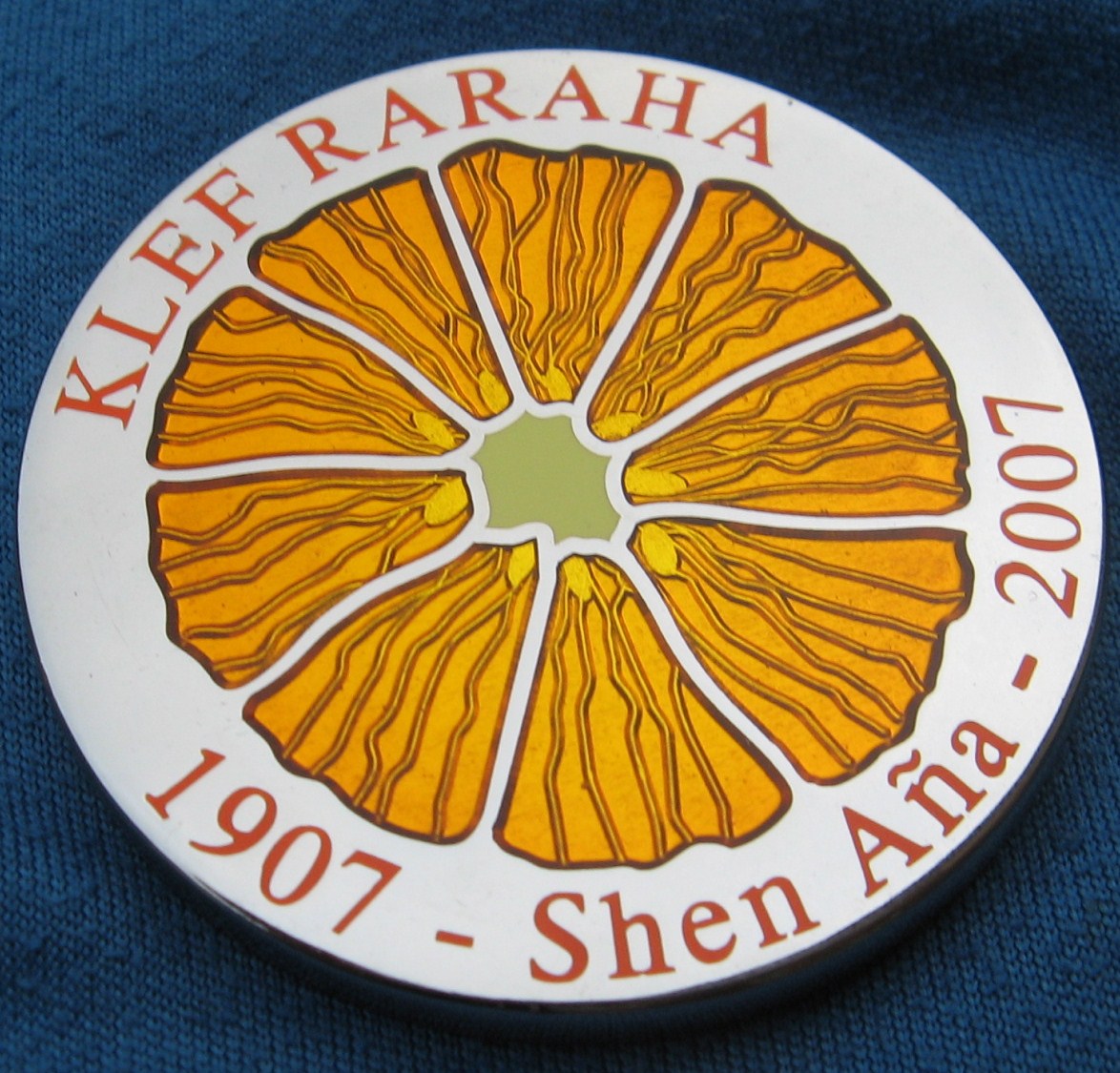 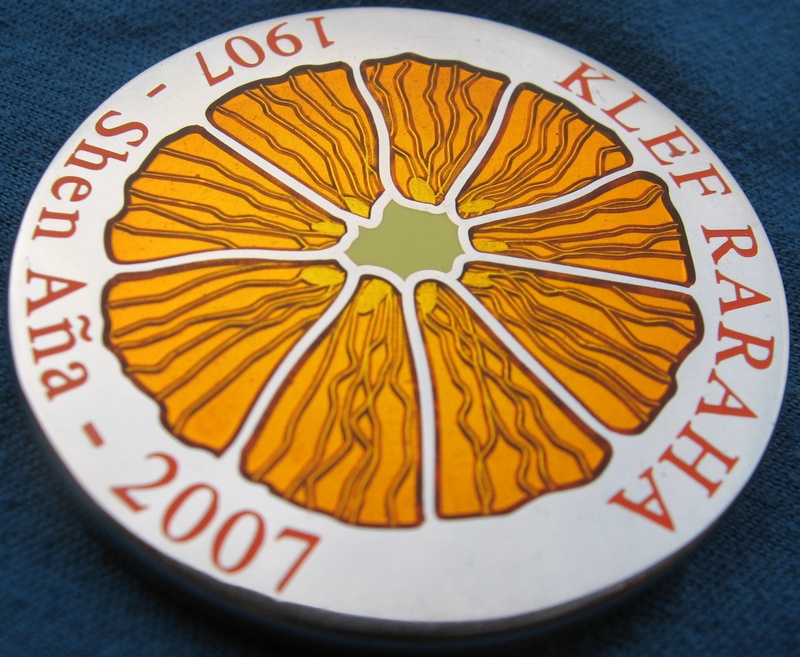 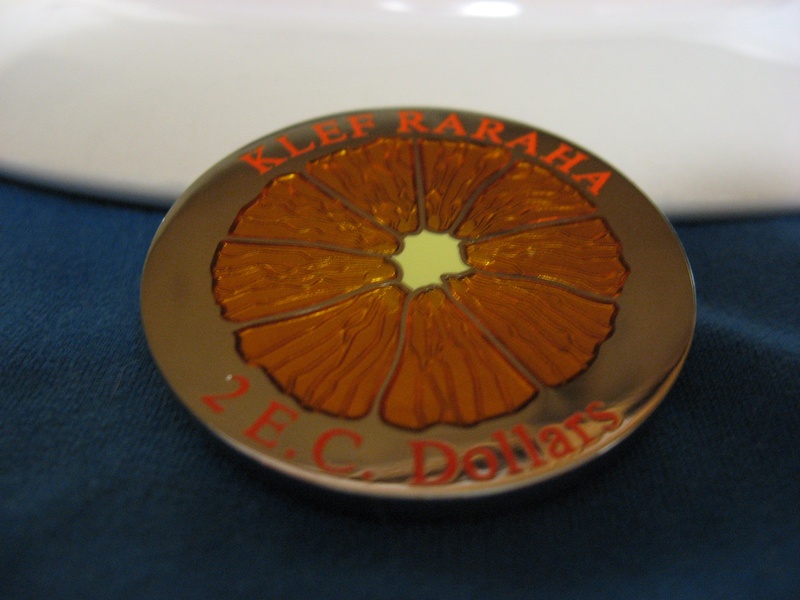 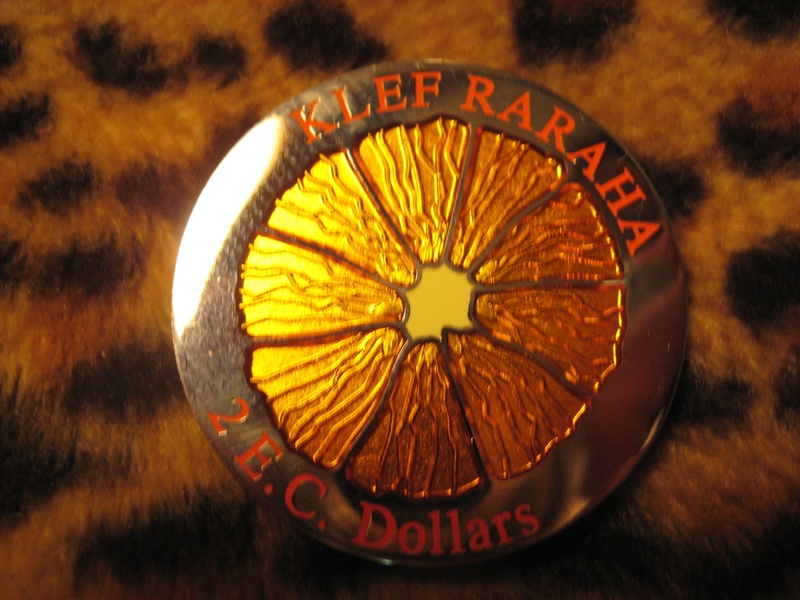 NOTE: Various other issues including Portuguese spelling in mintages of 60 to 100 were issued prior to the sale of Klef Raraha to the island inhabitants. Most earlier issues were from the two managers prior to the sale. One was a card with numerous denominations on a single piece of paper. None of the paper issues are currently available. Klef Raraha is a small Caribbean island in British territory with an area of 870 acres. The island is about 3 miles long and up to a mile wide offering two safe anchorages.

Klef Raraha, meaning Citrus Reef in English, is operated as a citrus plantation that is now owned by the islanders who number 465 at the latest census. The local population speaks Papiamentu and English.

Klef Raraha was once owned by a family of Portuguese origins (the Lopes family). The family operated the island as well as a number of other investments, however the present generation did not desire to live on the island. Since the cost to upkeep the island was rising and citrus prices were not the best, the family opted to sell Klef Raraha. Like Florida, Klef Raraha was hurting thanks to Brazil's low wages paid to farm workers.

For a few years, in the late 1990s, the island was for sale, marketed as a tourist destination at a very high price, but no takers came forward. Finally, the island was offered to the workers at a much reduced price, thought to be in the neighborhood of 25 million dollars .

Klef Raraha has operated continuously since the late 1850s. The island community was built to be self-sufficient. Generally speaking, most food is grown locally. Primary imports are oil/gasoline, basic necessities and some food items. A school, small medical facility, electricity, sewage and water treatment facility are a part of the infrastructure.

The island ships oranges, grapefruit, limes and tangerines and has a reputation of sweet high quality fruit. A juicing plant and refrigerated storage facility operate on the island. The physical quality of the fruit and it's sweet taste has made Klef Raraha citrus popular among more upscale establishments in the region.

Most homes are simple structures made of wood. They are plumbed and wired for electricity. The standard of living is considered above average compared to most of the Caribbean.

Klef Raraha is governed by a board selected by the adults on the island by popular vote. Anyone over 21 years of age may serve on the board. The board handles all aspects of the operation of Klef Raraha. The board operates as a cooperative owned by the islanders. The unusual duties of the board include managing the output of the island and basic governing of Klef Raraha.

There is a small business community on the island. A move in recent years toward private ownership of business has been encouraged as the board seeks to get out of its responsibility to purchase the needed supplies for the people and seeing to its distribution.

Most recently, the board has considered the potential of tourism. A small inn was being considered but we do not know how such discussions are proceeding.

Klef Raraha has come a long way in the past few decades as the population has moved from an almost feudal society to one that is considered modern and progressive, although islanders will admit everything from the houses to the equipment was neglected for years and in need of maintenance and repairs. In addition, some recent years the crops suffered from hurricanes that battered the island. Like many islands, the money is short and the list of needs long, but with the hope of better years, Klef Raraha hopes to maintain and prosper in the future years.

The people of Klef Raraha have a varied mix of ethnic influences and most came from southern islands of the Caribbean.

There have been many islands throughout the oceans of the world where the island's owner operated the island as a business with the objective to exploit the fruits of the land. In most cases, these outposts differed little from life in the 'Dark Ages'. The workers and their families worked the land while the owner took care of finding a buyer for the bounty of the land. Generally, anything the worker families needed came through the owner at the price the owner commanded.

Klef Raraha, like the much more famous, Cocos Keeling Islands, worked this way. The goods the working families needed were bought at the store that was owned by the island owner. The island owner was the bank as well. The owner doled out payments for work and generally was the absolute authority.

We do not know all types of payment that were issued, but in more recent years a 'picker check' type of paper note was given. There were several varieties, some in Portuguese and some in Papiamentu.

More recently, probably as a promotional or moneymaking scheme, enameled coins have been produced. It is assumed these were made for collectors and possibly merchants who regularly purchase Klef Raraha produce. These coins come in several different metals. They are valued at the typical payment issued for a bag of fruit picked. Most citrus is picked and placed in a cloth bag that will hold about 90 pounds of citrus. This seems to be the standard. Denominated as 2 East Caribbean Dollars, it has a face value of about $0.75 in U.S. Dollars. Thus, a citrus picker would receive roughly 75 cents for picking a 90 pound bag of citrus.