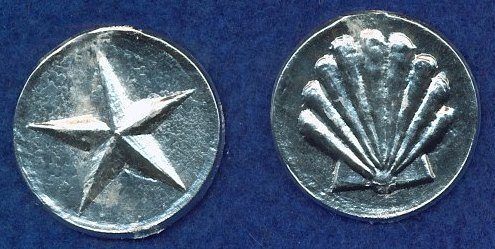 ABOVE:  The  1 Paku Coin, valued at 5 Pitis.  In a largely illiterate area, written text is not needed for this cast pewter coin. Long known for producing shell money for traditional ceremonies, the people of Kialua saw their supply of raw shell vanish leaving them no other option except metal coins.  Obviously the shell on the coin designates it is a substitute for shell money.  The 5 point star indicates the coin's value of 5 Pitis which is 1 Paku.  The star also is symbolic.  The traditional belief is when one dies, the soul goes to the sky where the ancestor can shine down even faintly.  Thus, the star offers the approval of the ancestors and honors them as the reason one performs the traditional ceremonies.  A traditional ceremony might be an annual feast or marriage where traditional money is exchanged.  Only 100 of these 24.5 gram 35 millimeter coins are available.

Ever so often a tale of a place that once was comes along.  Typically steeped in cloudy memories was a wonderful spot where life was great only to have tragedy strike, ending the peaceful life.  It is more rare to happen upon the grandson of one of those inhabitants.  He becomes the primary source of the details we have.

Out amid the thousands of islands in the ring of fire, there are many that were once prosperous little isles where life was good only to suffer at the hands of mother nature.  Such is the case for this island.

Once a lush and fertile island formed by a long dormant volcano, the peaceful existence came to an end when noxious gasses spewed from the towering center of the island.  Instantly, the people knew their life had changed forever.

As the eruptions and quakes continued, aid from nearby nations ferried the hapless inhabitants from the cursed land they called home for centuries.  A few, however opted to venture off across the ocean waves to locate a resting place until the destructive event had played out.  They’re still waiting.

Of the 6,000 to 7,000 that had lived on the island, all but a handful were relocated as refugees in the burgeoning colonial cities of yet to become independent nations in the South Pacific.  Over the years they melted into society and began life anew losing the cultural nuances they once kept alive on their home island.  Schools, western influences and the local society itself managed to take the cultural and social identity from these humble people.  The mingled, mixed, married and took their place in these urban environments turning their culture into a society lost to time.

Much like the early Pacific Islands people, the small group took to the sea, destination unknown, turning their fate over to a higher power.  They wound up at a submerged reef.  Through their knowledge and hard work, they gathered submerged stones and piled them up to make what one might call an artificial island.  Today the island is about 17,000 square meters of sand void of vegetation.  About 425 meters long and around 40 meters wide, it is now a permanent home.  The latest population figure is 34.

The people carry on the long tradition of making shell money.  This shell money is a means of making ceremonial payments in some cultures of the area.  Unfortunately, with the shells not being available locally, the islanders purchased shells from other areas but it seems the types of shells used are no longer available in any quantity.  Now the coins are made from pewter.

They continue to generate income via pearling and their highly prized mother of pearl handicrafts.  It is thought they obtain about $40,000 to $45,000 US Dollars a year from their work.

Most of the community lives on their boat.  All the people have small garden beds on the island for growing a few items.  Everyone fishes for a primary food source.  Rainwater is collected since there is no water supply.

With all of this said, is it accurate that the people’s culture has become a memory?  It certainly is.  The lifestyle of all the inhabitants has changed so much from life on the island, most of the cultural and social aspects have been incredibly altered.  Sure, a few aspects of life remain but I’m estimating a good 90% is now just memory.

That brings us to the college student in question.  He’s in college in California studying medicine.  He used to live in the Solomon Islands but managed to nab a college education in the United States.  His Grandfather was one of the movers and shakers on the island he only knows by the local name, Kialua.  I’m not even sure what island that is and he can’t say for sure either.

His Grandfather says they went back to the island but they couldn’t come ashore.  Gasses were still spewing intermittently years later and the areas where everyone had lived had been buried by lava.  Some areas were still hot.  In cooler areas plants were beginning to appear but in other places they had withered and died, either too close to the heat or the gasses.

His Grandfather spoke of an Eden where the island and surrounding waters offered a comfortable life.  He described a life where the powers in charge of the island showed excellent leadership and gentle persuasion on dissenters.  He said the island’s people were deemed powerful and respected and the island was prosperous.  In short, it was a pretty good life.  He spoke about his Grandfather further in saying the island was big enough to support a larger population and they had adequate protection from the wrath of mother nature.  Typhoons were weathered with stored foods and water while the people waited in caves for the weather to subside.  A tidal wave could only hit a few spots on the island.

Today this handful of original inhabitants of Kialua reside at this manmade sandbar where they trade with neighboring islands while managing a life on this tiny outpost.  Today they are a permanently displaced people who were dealt a large bag of lemons and decided to make lemonade.  At the very least, they are a resourceful people who literally created a home from submerged chunks of coral.  I think that is quite amazing in itself.

As had been mentioned earlier on, Kialua had been a ‘money’ island, a place where the people manufactured money from certain species of shells.  This created prosperity since many of people in the region needed the shell money to satisfy local customs.  Typically such shell money was used for a dowry or some celebration or as, more or less, part of a continuing ‘peace treaty’ among villages.  There was a good demand and Kialuans were experts at the craft.

Now forced from their island, the small group had to find other sources for the types of shell needed for making this money since the shells were not available locally. Distant suppliers picked up that burden but for some reason these suppliers can no longer get the shells, leaving the Kialuans to squeeze some more lemons.  And they did.  Today they cast their own pewter coins and these are accepted as a substitute for the shell money.

Interestingly, the shell money is called a “Paku”.  If my research is correct, this means ‘piece’.  Paku is a legitimate currency hundreds of years old.  While virtually all coins were called a Paku, there is an official exchange rate:  800 to a Spanish Dollar or Pieces of Eight (a well documented exchange rate).  That would give the pewter coin or its earlier shell counterpart a value of just under half a grain of silver.  We think these coins are made using coral molds shaped by hand using a metal mix that does not require a high temperature melt point.

The Paku coin in historical conversion rates was worth 5 Pitis coins.  This is why you notice 5 points on the star depicted on the coin.  That authenticates the coin as a true Paku.  The star on the reverse, while appearing on coins in the past, is primarily to indicate it may be substituted for traditional payments.  You see, the star is a symbol of one’s ancestors that appear to their future generations as a star in the sky watching over them, a common regional belief.  The star then is a symbol of respect for local beliefs and an implied acceptance by long deceased family members of the coin.  You see, observing the traditions is not just the way you do things but the tradition itself honors the ones who came before you (hence, now appearing as stars in the sky).

The Paku would be accepted as money by a local merchant without a second thought.  Generally a local exchange value is in place, generally about 2 or 3 Vatu in Vanuatu, about 5 to 10 Toea in Papua New Guinea or about 20 to 25 cents in the Solomon Islands.  These exchange rates are set by the merchants that accept these coins.  Circulation is always localized and very minimal as the coins have greater value as ceremonial money.  Certainly they cost many times more than the exchange rate to purchase, so a merchant receiving one as payment would not be a common event.